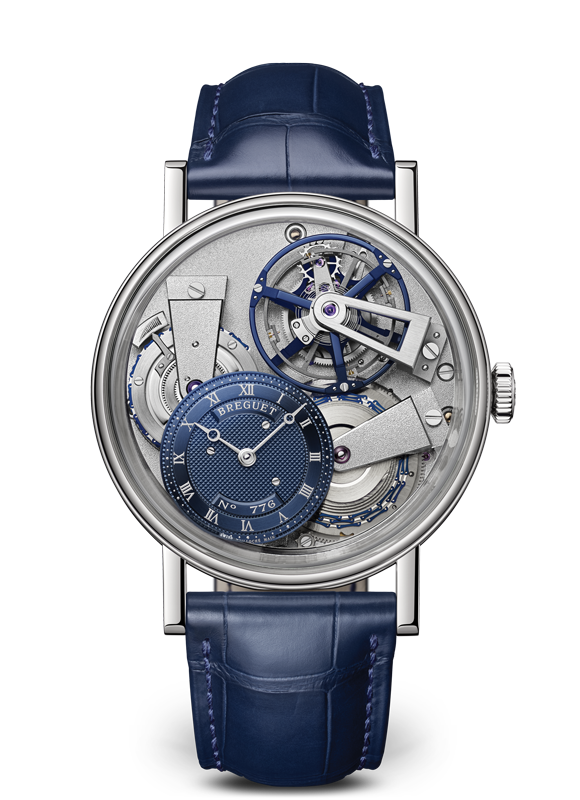 To mark the date of creation of the Tourbillon by Abraham-Louis Breguet, the Breguet unveils its latest model from the Tradition collection: a timepiece featuring strong colours highlighting what has remained – from past to present – one of the most fascinating horological complications of all times.

The fusée-chain tourbillon transmission device housed in the new Tourbillon 7047 serves to optimise the regularity of the watch’s operation by guaranteeing its constant torque, whatever its winding level is. When the barrel is fully wound, it delivers its maximum force. The chain then acts on the top of the fusée and therefore on its smallest circumference. As the chain unwinds, its torque decreases yet acts in parallel on the widest part of the fusée – its base – thus ensuring the constant force of the energy is delivered.

At the heart of its 41 mm platinum case beats Calibre 569, a rhodium-plated hand-wound movement housing 542 components. It is equipped with an inverted in-line lever escapement featuring horns made of silicon, as too is the Breguet balance-spring. This material has many properties, since in addition to being resistant to corrosion and wear, it is insensitive to the influence of magnetic fields and improves the chronometry (timekeeping precision) of the timepiece. Finally, the balance of the Tradition Tourbillon 7047 oscillates at a frequency of 2.5 Hz and has a 50-hour power reserve.

Resolutely contemporary while displaying the House’s emblematic codes, the new Tourbillon 7047 picks up the signatures of the ManufactureBreguet: namely the “Clous de Paris” guilloché pattern on its off-centre gold dial, the traditional Roman numerals and the open-tipped hands. Like the watches that inspired it, its dial is secured by three screws.