As the first expression of a high-end sports concept in watchmaking, the Royal Oak has never stopped shaking up its own codes, leaving an indelible mark on its times and giving birth to a line of more than 500 models. A look back at five decades of creative design.

50 years on, over 500 Royal Oak models have been created, turning this iconoclast into a cultural icon within and beyond watchmaking.

Just about 50 years ago, Audemars Piguet overturned the watch industry’s codes with the Royal Oak (Model 5402), the first high-end steel sporty timepiece. The case was entirely hand finished and housed the thinnest self-winding movement with date indication in the world (Calibre 2121). 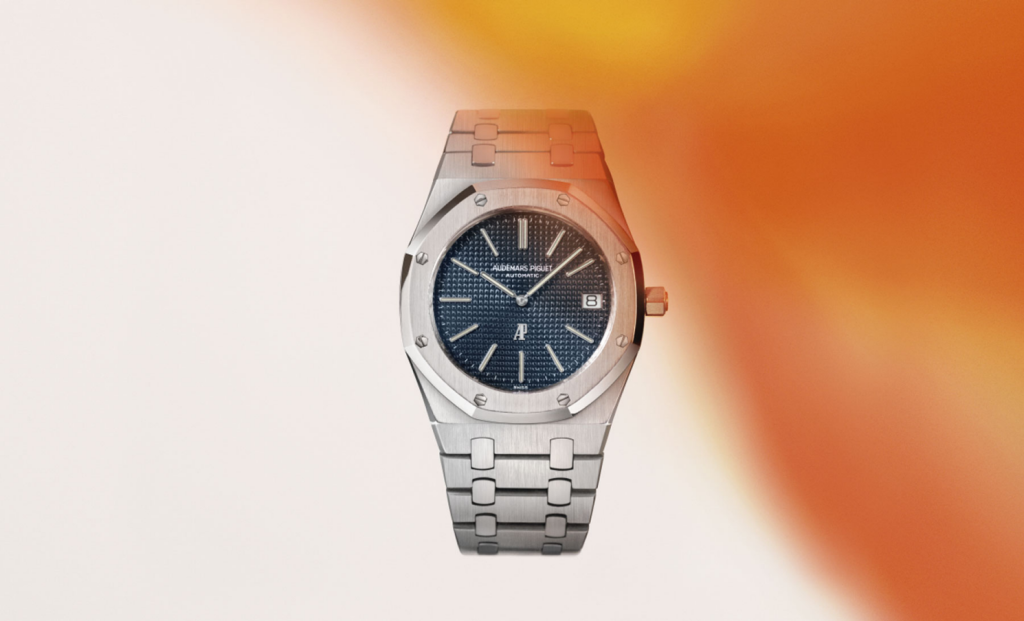 Birth of a Watchmaker Truly out of this World

A luxury watch adapted to the wearer’s lifestyle and not the other way around. What may seem obvious today did not necessarily make sense at the dawn of the 1970s. The gap between sports and evening watches still looked insurmountable, but the ongoing cultural revolution tended towards abolishing such distinctions across the board.

The presentation of the Range Rover in 1970 illustrates this call for versatility. It is at this point that the concept of the Royal Oak takes seed: a watch as sporty as it is elegant, adapted to modern lifestyles. The disruptive lines, sketched in one night by Gérald Genta, proved so successful that they established a recognisable look for the next five decades. The first evolution, unveiled four years later, was designed for women by a woman; Jacqueline Dimier, then head of design at Audemars Piguet. She took up the challenge of reducing the proportions of Gérald Genta’s original: the new Model 8638 is only 29 mm in diameter.

In response to those who found the 5402 unsuitable for slimmer wrists, the 4100 was introduced in 1977. Its 35 mm case, also designed by Jacqueline Dimier, opened wide the doors to markets still holding out against the Jumbo. At the same time, the first copies in gold and two-tone made their debut in the catalogue. The unique Royal Oak steel model had given rise to a whole collection. 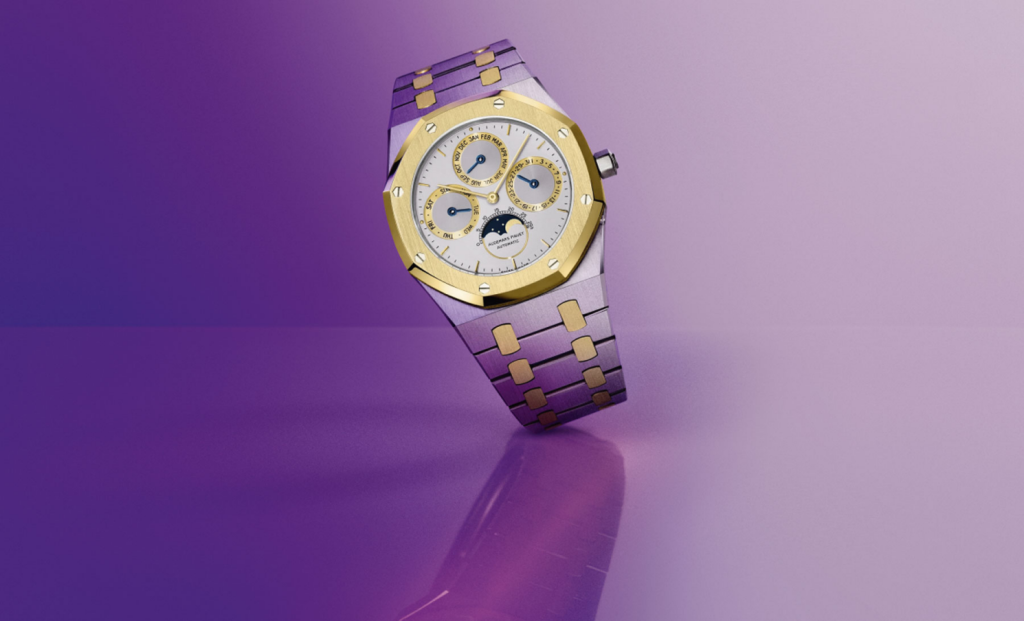 Between 1977 and 1981, more than 27 new references were born, available in many sizes, for men and women, animated by seven different calibres and whose varied dials were sometimes without Tapisserie. The first quartz Royal Oak arrived in 1980.

Initially reserved for women’s models, the new technology reached the men’s range two years later. In ten years, nearly sixty Royal Oak quartz models were launched, equipped with six different calibres. By the mid-1980s, nearly half of the Royal Oaks were quartz, a proportion that would continue to decline thereafter. In 1983, when the majority of Royal Oaks had grown to 36 mm in diameter, the first model with a complication made its debut in the catalogue: the Day Date Model 5572 which would soon be followed by the Royal Oak triple calendar, also available with a moon phase.

The first openworked version was unveiled in 1986: a yellow gold watch with a perpetual calendar that introduced the collection’s first sapphire caseback. Just a decade after its launch, the Royal Oak was playing a central role in the revival of classic complications, a role that that has continued to assert itself.

The first Royal Oak Tourbillon watch (Model 25831) presented in 1997 to mark the collection’s 25th anniversary features an octagonal opening at 6 o’clock, resonating with the bezel’s famous outline. Unlike other Royal Oak models, it does not have a visible crown on the side of the case. 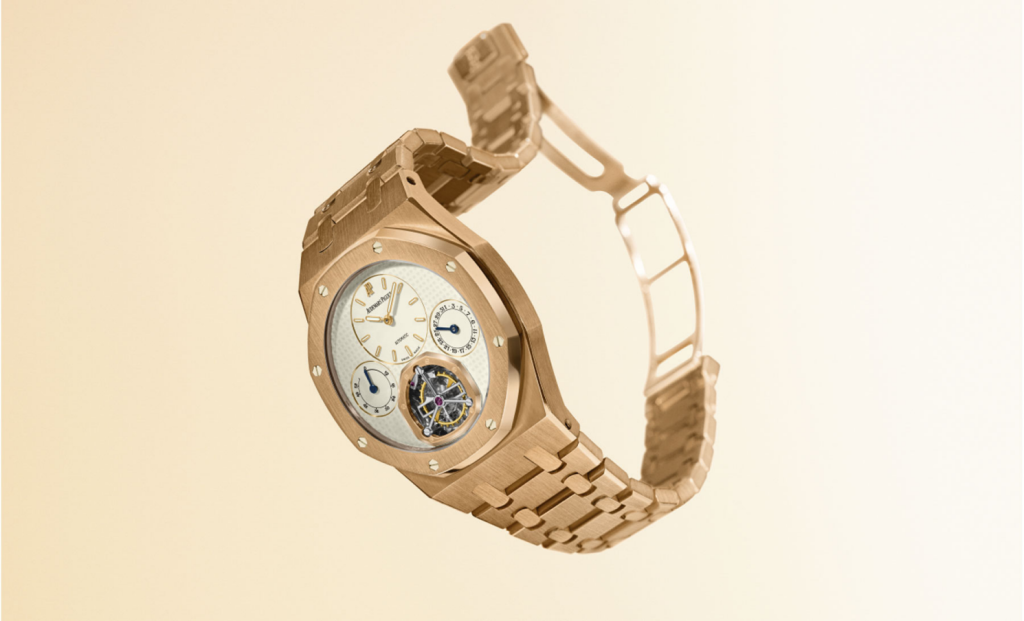 In 1992 the Manufacture unveiled reference 14802 to celebrate the twentieth anniversary of its flagship model. It was the collection’s first limited edition consisting of 1,000 examples in faithful tribute to the 1972 Jumbo. A version with a leather strap – a notable first – appeared the same year. In 1993, a revolution kicked off with the arrival of the Royal Oak Offshore and its imposing 42 mm case diameter. Its kinship with the Gérard Genta’s Royal Oak is undeniable, but it is nevertheless a new departure. Designed by Emmanuel Gueit, it incorporates innovations: the lugs are now curved, an imposing black seal is revealed under the bezel while the crown and pushers are clad in rubber.

Equipped with a chronograph, the Royal Oak Offshore took a giant step into sport, charming a young generation thirsty for adventure. It struts an uninhibited virility that will be emulated in the watch industry. Contrasting with the new range, Audemars Piguet is mindful of its female audience with the presentation in 1997 of the Royal Oak Mini at 20 mm in diameter. The women’s collection had already been enriched with openworked watches a few years earlier, and in 1998 a jewellery line was crowned by the first Royal Oak Haute Joaillerie Openworked model, its white gold case and bracelet entirely set with 446 diamonds and emeralds.

In a single model, Audemars Piguet demonstrated that it is possible to marry the great watchmaking and jewellery traditions with resolutely contemporary design. The 25th anniversary of the Royal Oak saw the inauguration of three new additions to the complication range: the Royal Oak Tourbillon with a 40 mm white gold case, a 39 mm chronograph and the very first Royal Oak Grande Complication, heir to a tradition of excellence dating back to 1875. 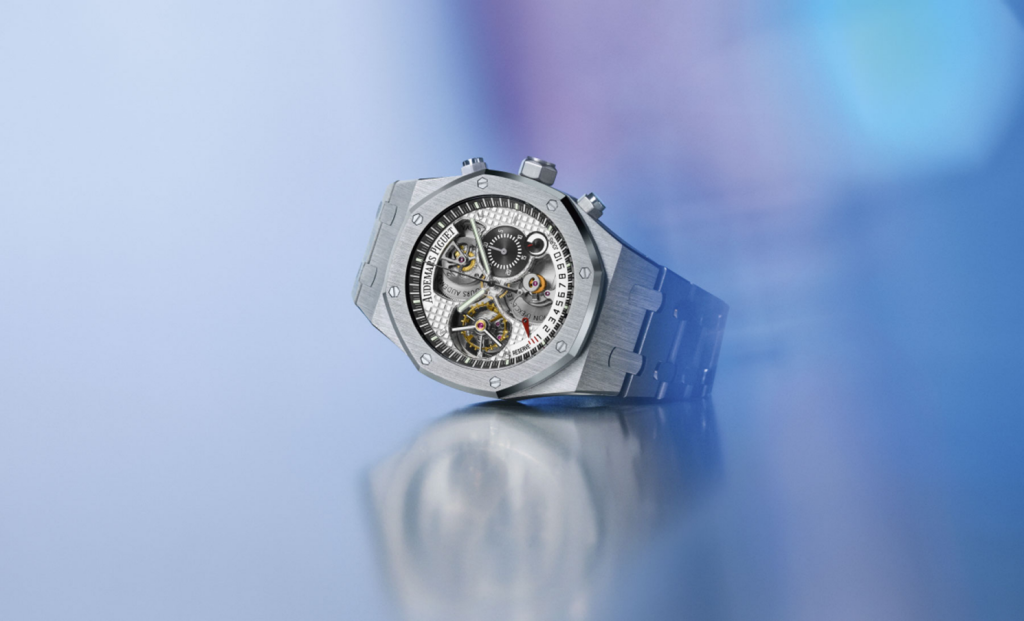 The Royal Oak of the Third Millennium

Fitted with Calibre 2893, a hand-wound tourbillon chronograph with a ten-day power reserve, Tradition of Excellence No.4 (Model 25969) was launched in 1999 and limited to 20 pieces.

Among these freedoms, we note a sapphire caseback and a dial with a Grand Tapisserie pattern now available in silver colour. This return to origins is in no way at the expense of avant-garde techniques and designs, as evidenced by the presentation in 2002 of the Royal Oak Concept, directly inspired by the most radical concept cars. Surmounted by a titanium bezel, the 44 mm case is cut from an alloy of Alacrite and Kevlar used in aeronautics.

The spirit of innovation embeds even deeper in the DNA of the Royal Oak. The 2000s were also marked by the launch of several Royal Oaks in limited editions, in association with high-level athletes and personalities from various backgrounds such as music, cinema and entertainment.

The exceptional journey of the Royal Oak demonstrates its unique ability to bring different worlds together. At the crossroads of design, art, sport, innovation and craftsmanship, its story is one of an eternal explorer turned icon of modern design. Above, the new Royal Oak “Jumbo” Openworked from 2022 (Model 16204) in pink gold. On the right, the 41 mm Royal Oak Double Balance wheel Openworked (Model 15407) launched in 2016 introduces the patented double balance wheel system. 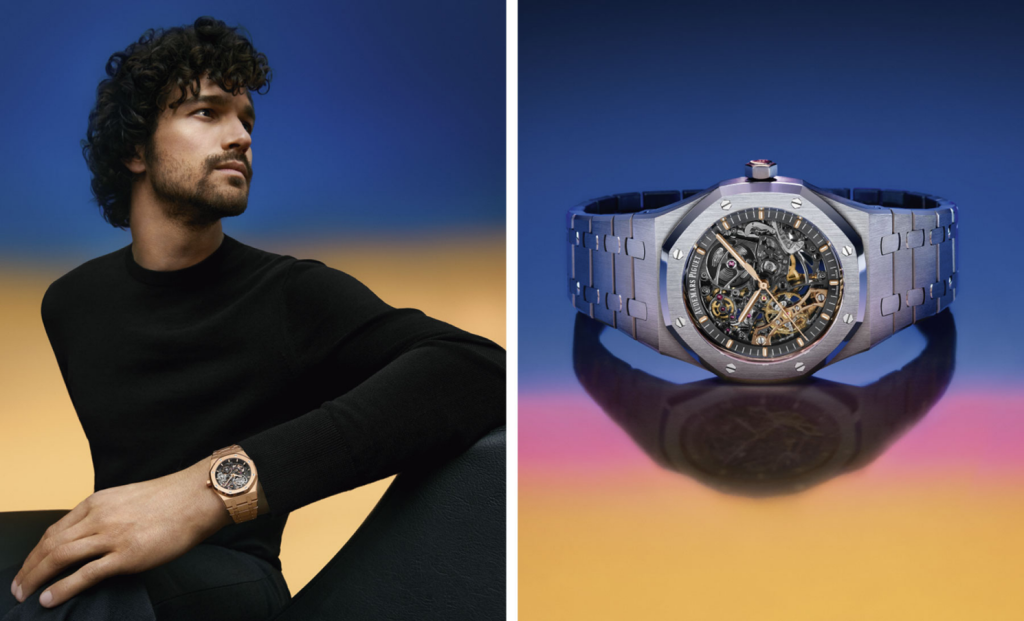 After the spectacular, futuristic and often imposing creations of the previous decade, the Royal Oak enters a phase of full maturity after 2010. With a retrospective exhibition travelling around the world, the Jumbo 15202 unveils a dial that is even more faithful to that of 1972: AP monogram at 6 o’clock, Petite Tapisserie and Bleu Nuit colour, Nuage 50. The reference 15400 with its 41 mm reinforces the collection in 2014, while 2018 is marked by the revival of bimetallic variants, not seen since the 1980s. A reference of 37 mm asserts itself as the collection’s mixed model. In 2016, Carolina Bucci was invited by the Manufacture to revisit the first Royal Oak for women, now celebrating its fortieth anniversary. The Italian-born jewellery designer reinterpreted the Florentine technique of gold hammering that gives a “frosty” shimmering look for which the Royal Oak Frosted Gold is named. Two years later, the Royal Oak Perpetual Calendar Ultra-Thin Selfwinding became the thinnest perpetual calendar selfwinding wristwatch in the world. A stroke of brilliance faithful to the concept imagined by Gérald Genta half a century earlier and paving the way for a new generation of Royal Oak.