Beyond The Sky With The New Maserati Spyder 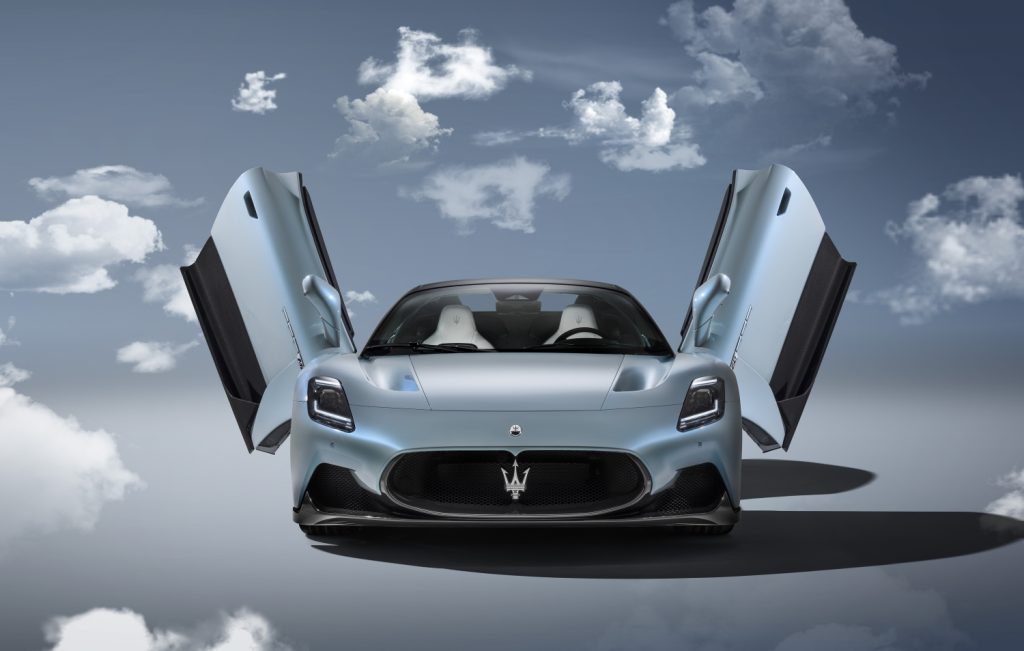 MC20 is a one-of-a-kind spyder:
at one with the clouds and the stars, without sacrificing the performance of the coupé.

Modena, 26 May 2022 – Maserati MC20 Cielo opens up new horizons. The Cielo is a “first-of-its-kind” spyder: getting in and driving the car is like diving into a new holistic dimension. The spirit of the super sports car takes on a new form; shaped in a wind tunnel, the clean lines open up and become one with the clouds and the stars, without sacrificing the thrills inherent in the coupé version.

MC20 and MC20 Cielo are twins with two different souls: two distinct models, both one of a kind yet united by the racing spirit, audacity and performance of genuine sports cars.

Cielo offers an all-new, immersive driving experience, courtesy of its electrochromic (smart glass) roof. Simply press a button and the senses are awakened: in only 12 seconds, the super sports car is transformed, opening the top up to the sky. Alternatively, if you prefer to enjoy the all-encompassing atmosphere in the cabin, this is where the “sky feeling” comes into its own. Another tap and the roof goes from opaque to clear. One more and the magic happens again, this time in reverse.

Innovation, the guiding spirit at Maserati: state-of-the-art Polymer-Dispersed Liquid Crystal (PDLC) technology lets you look up at the stars even when the top is on. It only takes a moment for the roof to become clear, at virtually any temperature, while the sound insulation keeps you cradled in the greatest comfort there is.

The Cielo is a holistic car and makes this its manifesto at first sight, with the exclusive Acquamarina colour. Available as part of the Maserati Fuoriserie customisation programme, the launch colour expounds the idea of travelling in the great outdoors. The three-layer paint is based on a racing-inspired grey, with an iridescent mica in aquamarine. A fresh, bright tone, it interacts with the light and is revealed in a spirit of surprise, contemporaneity and lustre.

To make the connection between the spyder’s elegance and sporty soul even more exclusive: the PrimaSerie Launch Edition, a limited series with exclusive features such as the Acquamarina bodywork, ice-coloured interior and even a few golden details.

The secrets of the MC20 are no longer a mystery and are redoubled in the MC20 Cielo: pure minimalism and refined aerodynamics, researched in a wind tunnel. Everything remains functional in the new model too, but the ‘wow’ factor is not lost: the butterfly doorsopen up as a coup de théâtre, like wings unfolding upward towards the immensity of the heavens. They are designed to make it easier for the driver and passengers to get in and out despite the low floor, always ready to go.

To top off the driving experience, the uncompromising performance of the Nettuno engine: the heart of the MC20 Cielo, the Maserati-patented V6 twin-turbo petrol engine with technology derived from Formula 1 and the capability to unleash an extraordinary output of 630 hp in 3000 cc of displacement.

The privileged contact with the absolute is also made all-encompassing by the North Sails capsule collection designed exclusively for the MC20 Cielo: Maserati is innovative by nature and is looking ahead into the future; North Sails and its extraordinary success on the high seas enables every generation of explorers to push the boundaries of challenge.

The upshot is a collection of high-performance, cutting-edge clothing, aimed specially at the adventurous in life: directly inspired by the PrimaSerie Launch Edition and its characteristic exclusivity, with its golden details and Ice Grey colour reminiscent of its racing spirit.

Here comes the wind again, bringing new Maserati models as per tradition. This time, the car doesn’t take the name of a wind, but evokes it instead: MC20 Cielo blows a wind of innovation, a new spyder concept of a one-of-a-kind super sports car in the “open-air”version, with the wind in its hair.

The MC20 Drive Event in UAE

Ferrari Purosangue: Unlike Any Other